Please note that our AGM will take place at 6pm at the Merrion Hotel on 26th April.

On this auspicious week when Article 50 is triggered by the UK, I am delighted to announce that James Libson of the London law firm Mischon De Reya, who represented Gina Miller in the landmark Article 50 legal challenge against the British Government, will give a talk.

Article 50 paragraph 1 states that “any member state may decide to withdraw from the Union in accordance with its own constitutional requirements.”  Post-Brexit, the outcome of the Gina Miller case prevented the UK Government from triggering Article 50 without first being authorised by parliament to do so, in accordance with UK constitutional requirements.  The case sparked controversy amongst the public, politicians and the media, provoking the “Enemies of the People” headline targeted at the UK judiciary.  James Libson represented Gina Miller in this landmark case and will give an insider's account of the challenges faced by the legal team and will also discuss the aftermath of the decision on a national level.

We have arranged canapes and a drinks reception for after the event and I look forward to seeing you all there!

Notice is hereby given that the Annual General Meeting (AGM) of the Employment Law Association of Ireland (ELAI) will be held at the Merrion Hotel, Merrion Street Upper, Dublin 2 on Wednesday, 26th April 2017 at 6.00pm to transact the following business:-

3.       To elect the officers and ordinary members of the Executive Committee of the ELAI.

By order of the Executive Committee

Notes to the Notice of Annual General Meeting

1.       The Chairperson will provide a brief report to the members on the work carried out by the ELAI and the Executive Committee.

2.       The Treasurer will provide a brief account of the finances of the ELAI and report on the rates, which she has agreed with the Executive Committee, are desirable.  The Executive Committee is proposing that the full subscription annual rate of €85 be maintained.

3.       Nominations for the office of Chairperson, Vice Chairperson, Secretary, Membership Secretary, Treasurer, North/South of Ireland Co-Ordinator and ordinary members of the Executive Committee shall be made to the Chairperson at the AGM.

4.   Any other business may be tabled by the Chairperson at the AGM.

Note: Any matter of general business which a member wishes to bring before the AGM should be notified to the Secretary in writing no later than 7 days before the AGM.

Except as provided above, members who have general queries about the AGM should contact the Secretary at This email address is being protected from spambots. You need JavaScript enabled to view it. in advance of the meeting.

Our colleagues at the American Bar Association: Section of Labor and Employment Law will host a major international Midyear Meeting in the Westbury Hotel, Dublin from May 7 - 11 2017. The Midyear Meeting, hosted by the International Committee of the ABA Section of Labor and Employment Law will comprise a diverse series of presentations from leading international employment law and labour law experts.  ELAI is proud to sponsor the opening of the conference with drinks Sunday evening 7 May at the Westbury Hotel.

Justice Mary Laffoy our ELAI Patron will open the conference on the Monday 8 May.  Topics will include Brexit, social media, data protection, cross-border employment and trade union recognition and restrictive covenants and a draft list of topics are attached. The meeting promises to be a globally-significant gathering of experts in the field. Full details and registration details  for conference are available here.

Non members of the ABA are welcome to attend the conference although a variety of membership options to join the American Bar Association are available here.

The full programme of events is available here.

We would encourage our members of ELAI to attend as it is a unique opportunity to meet employment professional not only from the US but across the EU who also attend such mid year meetings in what are fascinating times for lawyers in the US and lawyers in the EU and the UK with Brexit.

‘The Other Side of Social Media – Business Use and Crisis Management’

Register: Please RSVP to Danielle Haughton at This email address is being protected from spambots. You need JavaScript enabled to view it.

Our next seminar will be held on the topic ‘The Other Side of Social Media – Business Use and Crisis Management’.

At this seminar, we will focus on social media in the workplace and the key issues it raises for employers including, unions and trade associations, and for our clients.  By the end of the seminar, attendees should understand the biggest challenges social media poses to employers, preventative steps to take, common pit falls of a social media strategy, recent Irish development, etc.

We will be joined in a panel discussion by;

·       Sean Jones QC who will discuss the legal implications of a social media strategy;

·       Cliona Kimber SC who will explore recent Irish case law on social media in the workplace, the ownership of devices and use of service providers through work terminals and copyright related rights of employer/employee privacy issues; and

·       Amy Harte, Communications Clinic, who will consider the challenges of a PR/communication strategy in a crisis situation.

The seminar will take place on 16th November at William Fry, 2 Grand Canal Square, Dublin 2 with registration commencing at 6pm.  We are grateful as always to our host and if you would like to attend, please send your rsvp to Danielle Haughton at This email address is being protected from spambots. You need JavaScript enabled to view it. for catering purposes.

The Employment Law Association of Ireland cordially invites you to its Annual Dinner 2016 with guest speaker and honorary members, which will take place in the Westbury Hotel, Dublin on 24 November 2016.

Our Guest Speaker Paul Gilroy QC will talk on the fascinating topic of: Playing by the Rules – Tales from the Touchline as the Law of Employment collides with the World of Football.

Paul Gilroy QC is a leading English barrister with a national and international reputation, principally based on his employment and sports practice. He has advised and acted for a sellar list of football clients; Sir Alex Ferguson, Roy Keane, Ryan Giggs, Martin O’Neill, Louis Van Gaal, Gianfranco Zola, Gary Neville and Sam Allardyce.

Honorary Guests include: Our Patron, The Hon. Ms Justice Mary Laffoy of the Supreme Court of Ireland, The Hon Mr Justice Paul Gilligan of the High Court, Mr Kevin Duffy and Mr. Kieran Mulvey who in recognition for their contribution to employment law will be conferred honorary ELAI life time membership.

Queries:   Address to Danielle | e: This email address is being protected from spambots. You need JavaScript enabled to view it.

Bookings:   Purchase of tickets is by invitation through Eventbrite* please contact Danielle if you are not on invite list to purchase.

We look forward to welcoming you at the Westbury.

Substantial numbers of the 139 legal and industrial relations practitioners who responded are dissatisfied with the new system, with one in every two practitioners believing it is worse than the much-criticised, older version. The survey was covered by RTE News, the Irish Times and an opinion piece by ELAI Chair, Colleen Cleary was published in the Irish Examiner.

The infographic below details the main results of the survey which was conducted by Dr Brian Barry, committee member of the ELAI and lecturer in law at Dublin Institute of Technology. 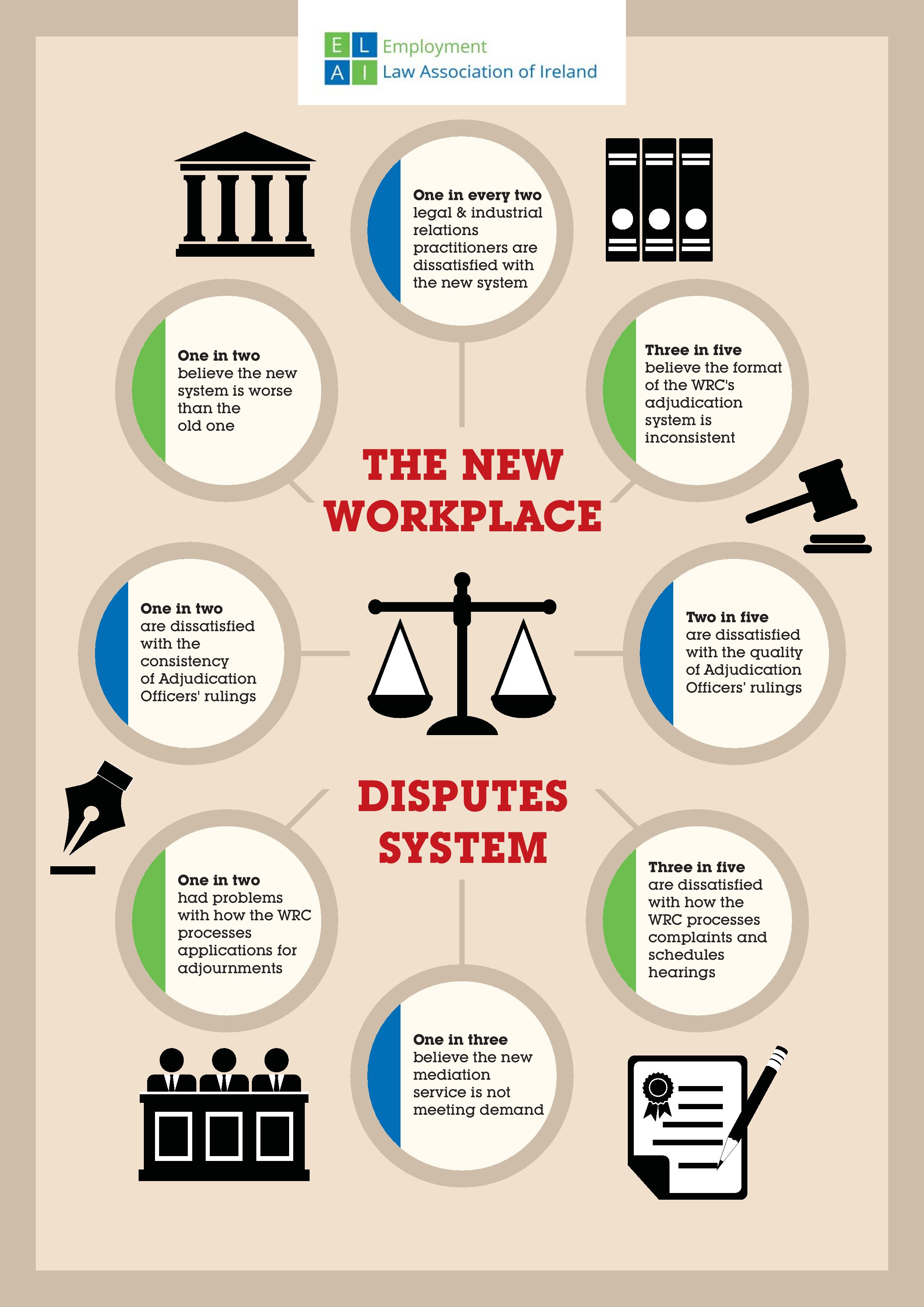 General views of the new system

The Workplace Relations Act 2015 introduced a new Adjudication Service to adjudicate on workplace disputes in the first instance. Practitioners were asked for their views on this new service.

• 40% of practitioners expressed satisfaction with the competence of Adjudication Officers at the Workplace Relations Commission, 30% were dissatisfied and 30% were neutral on this point.

• 63% practitioners said that the format of hearings hosted by Adjudication Officers at the Workplace Relations Commission which are now held in private was not consistent from hearing to hearing.

The Workplace Relations Act 2015 introduced a new mediation service as a voluntary alternative to adjudication.

• More practitioners (34%) expressed the view that they were dissatisfied with the availability of mediators than were satisfied (27%). Many practitioners commented that resources and personnel allocated to the service were insufficient to meet the demand for the new service, leaving many workers and employers without access to mediation.

Processing complaints at the WRC

• 60% of practitioners expressed dissatisfaction with how the Workplace Relations Commission processed complaints and scheduled hearings.

Practitioners were asked for their views on the revised Labour Court which now also hears appeals from decisions of Adjudication Officers at the Workplace Relations Commission.

• 59% of practitioners expressed satisfaction with the competence of the Labour Court. Only 13% expressed dissatisfaction.

Workplace Investigations - An Insider’s View to be kindly hosted by McCann FitzGerald Solicitors, Riverside One, Sir John Rogerson Quay, Dublin 2. This will be a round table discussion and a real opportunity for ELAI members to gain a meaningful insight from experts who are leaders in this growth area.

Registration is at 6pm with a commencement time of 6.30pm – 8pm.

Our excellent panel of speakers will include;

• Julie Fenton is Head of the Fraud Investigations Dispute Section of EY and an Assurance Partner with over 20 years in the delivery of professional services to clients to include forensic accounting, investigations and dispute resolution.

• Paul Glenfield is General Counsel and Head of Risk in Matheson having previously headed up the Employment and Equality Group and has many years’ experience in advising both employers and employees on the conduct of workplace investigations.

If you require CPD you can register on the day. As you know, ELAI relies on the generosity of its members to host their events and on this occasion, it would assist our kind host, McCann FitzGerald, to confirm your attendance by emailing Danielle at This email address is being protected from spambots. You need JavaScript enabled to view it..

The Workplace Relations Act 2015 - One Year On A full day conference will be held in the UCD School of law in conjunction with the Employment Law Association of Ireland on Saturday, 1 October 2016. This will be an excellent conference with an array of eminent speakers, as well as a full report on the ELAI Survey on the operation of the WRC. ELAI members can avail of a reduced conference fee of €100 for a full day conference. For details please see https://www.ucd.ie/law/newsandevents/events/theworkplacerelationsact2015-oneyearon/

ELAI will host an event entitled "Legal privilege and in house counsel". These issues will be discussed in the context of employment law. The seminar will be delivered by our overseas guest Paul Epstein QC and Kevin Kennedy from McCann Fitzgerald.

ELAI's AGM will be held at the Conrad Hotel, Earlsfort Terrace, Dublin 2 on Thursday, 7th April 2016 at 6.30pm. Delighted to announce that our guest speaker will be Alex White, SC and Minister for Communications, Energy and Natural Resources, who will give us an interesting reflection on:

"Election 2016 - what now for Employment Law and the Irish Workforce?"